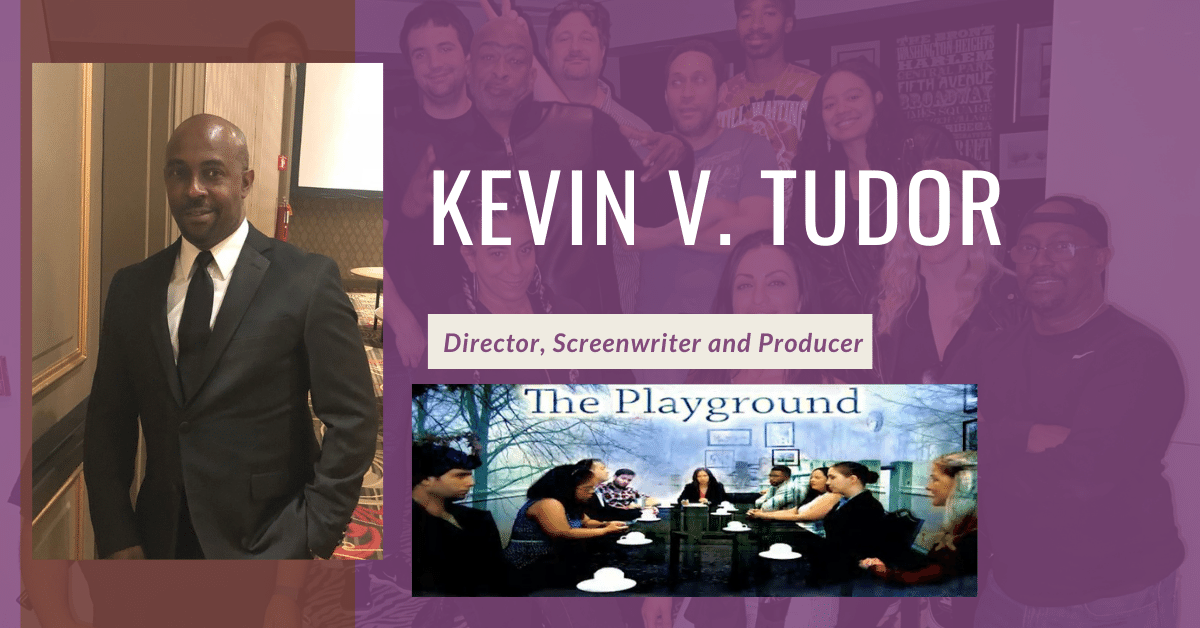 Kevin V. Tudor is a director, screenwriter and producer of the feature film, The Playground. The Playground is the story of a young psychologist who writes a manuscript about how social media decreases intelligence. The medical and psychology communities praise the manuscript where the government hates it. The government hires her to perform a study where she brings in eight very different, strong mind individuals to discuss race, sex and politics. The Playground screenplay developed from watching and reading news media and listening to people’s political views.

Thank you Kevin Tudor for the interview. First of all, we want to know, how was your childhood?
Thank you FilmmakerLife for having me.  For the most part, my childhood was good.  I was a little skinny kid, educated in the New York City Public School system.  I was good at sports and had lots of friends.  I was also the target of negative people’s ridicule.  I would always hear you are too small, too slow, not smart enough.  Not only would I hear this from my peers but from adults as well.  The balance came from my mother and an older sister who always reminded me there is no such thing as “no’’.    They were my encouragement which lead me to be a track star, played a little football and later become a surgeon and filmmaker.  These days I do speaking engagements with children through my fraternity, Phi Beta Sigma, at which I emphasise my mottos:  “There’s no such thing as no” and “Make it happen”.

How did you decide to go from biology, being a surgeon to the world of cinema? Without a doubt, different specialities, is there a special ingredient to your passion?
I always had a love for movies.  I was a biology major at Lincoln University in Pennsylvania and my work study job on campus was at the Instruction Media Center where I learned filmmaking.  This was a win – win for me.  Later, while in med school, I had this idea of writing a screenplay.  With that, a filmmaker was born.

Your first film Vicky’s Dad becomes your first short film, and with it great recognition, tell us about the process.
Vicky’s Dad was, without a doubt, my introduction to the filmmaker’s school of hard knocks.  I learned filmmaking on 8mm and 16mm film while at Lincoln.   More than ten years had past and everything filmmaking was computerized.  And I am the epitome of computer illiteracy.  Getting actors and rehearsals were great but I found that shooting and editing was an expensive education being that I was not computer savvy.  Once we finished the project, I sent it out to some film festivals and it was received well.

What does Sandstorm Productions represent to you?
Sandstorm is my baby.  The company is something I always wanted to do since I started making movies.  It was also different from medicine.  I would say it is one of my biggest accomplishments.

Apart from Vicky’s Dad, what other productions have you done?
I have quite a few shorts that can be found on YouTube:  “Vicky’s Dad”, “Woman of Convenience”, “The Silent Observer”, “A Night Time Story”, “Gemini”, “Doctor’s Orders” and “Red Carpet”.  “Truth’s and Fairytales” was my first feature.

How did The Playground come into your hands?
The idea for “The Playground” represented a sign of the times.  The political environment in the United States was very divided.  I would speak with people and everyone had an opinion.  Many were full of prejudice.  I came up with this idea to shoot The Playground in a form that mirrored the film, Twelve Angry Men.  What would happen if you place a number of people with strong beliefs in a room to discuss heated topics?

I suppose that for any producer and film director each project is a challenge, but to carry it out in two days, how was it achieved?
The shoot for the Playground required lots of planning and rehearsal.  The location we used was a conference room in the Radisson Hotel in New Rochelle, New York.  We could only rent it for a weekend.  My director of photography, Heath Snow, came up with an idea of strategically placing 5 cameras throughout the room.  On my call of Action, all of the actors would perform.  This method of shooting worked, however it took a very long time in post production with editing, color coordinating and sound.

The script is about a psychologist that carries a study with 8 people and discuss race, sex and politics and it ends badly. Do you think it is a reflection of what we live in reality in the real world?
I believe The Playground definitely represents today.  People are more open about their opinions and I have found that they are more open about their prejudices than what I have seen in the past.

Do you plan to make a second part with the same message?
I have thought about it, but I’m not committing to it at this time.

We know that you have your next feature film, “Tin Man” on your doorstep, can you tell us something about this upcoming project?
TinMan is about a doctor who is caught up in a conspiracy theory that a virus is not only manmade, but is purposed to limit world population.  I have brought back many of the same cast and crew from The Playground for this film.  We are very excited about it and hope to have a finished product by Christmas.

Where can we watch your productions?
Many of my shorts are on IMDB as well as the first feature film, Truth and Fairytales.  We are currently in the process of obtaining distribution for The Playground.

This Extraordinary Talent Interview has been published in the October 2022 Edition of the FilmmakerLife Magazine.