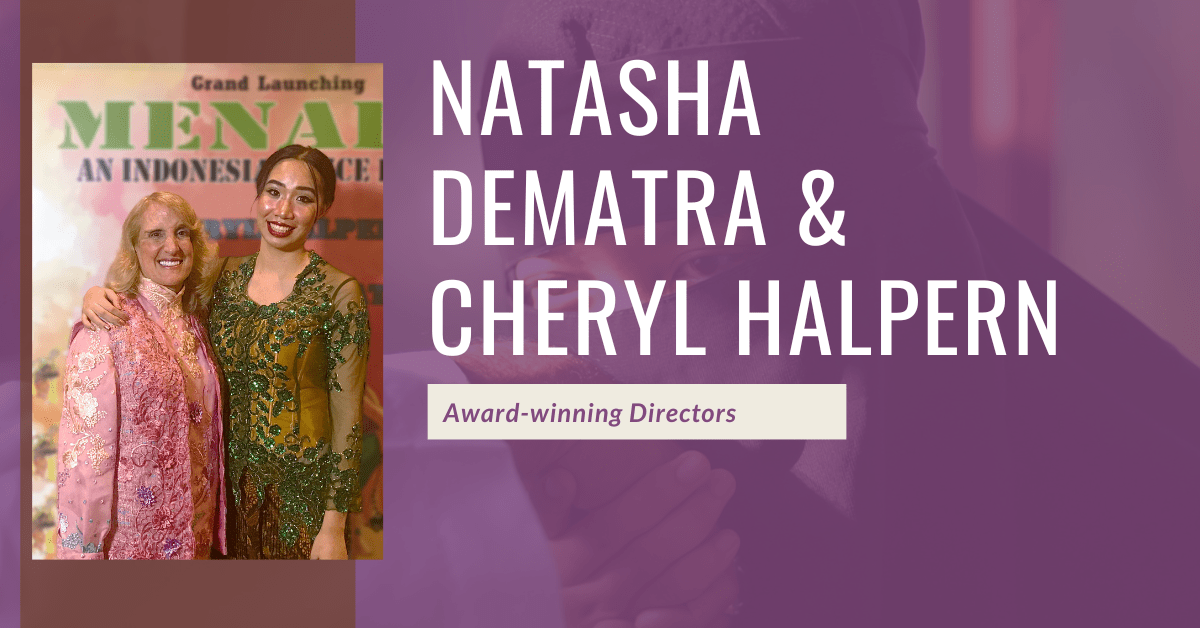 You produced & directed the film ‘Holy Prostitution’. What should the audience expect to see?

Cheryl and Natasha- “Holy Prostitution” documents the experience of a young female minor in a Mut’ah marriage which is also known as a “marriage of convenience”. The practice of Mut’ah marriage is regarded by many as an exploitative form of legalized prostitution and is widely banned. This documentary explores a young Indonesian woman’s experience in the Puncak region through her own testimony and re-enactments. We applaud her courage to share her story.

Tell us a bit about your background. When did you decide to become a filmmaker?

Cheryl- My parents taught me through their own actions that it is incumbent upon each of us to recognize that we have the capacity as well as the responsibility to care for one another and to do for each other regardless of gender, race, physical or mental handicaps or religious beliefs. This is a moral challenge that each of us must address, especially if we aspire to live in a more peaceful world. I chose to commit myself to this challenge by using film as a means to create awareness and acknowledge persons who have made social contributions to their respective societies. Individuals who have committed themselves to improving the quality of life in their communities and cultures are role models whose stories need to be told. This has been a priority for me and I have focused my efforts on producing films that will hopefully inspire others to do what they can to improve themselves and their communities.

What are the directors that inspire you the most?

Natasha -There are many directors that I have looked up to and who have inspired me to become a filmmaker.  The most important director for me is my father who is a successful filmmaker and was my teacher, my mentor and my inspiration. I am very appreciative of the opportunity to co-direct with Cheryl. She has taught me how focus on the details in order to make the message of the film impactful.  Storytelling is essential to the art of filmmaking and I am grateful to Cheryl for helping me to develop my storytelling abilities.  I am looking forward to continuing to learn from both my father and from Cheryl.

How did come up the idea from for documenting this story?

Cheryl- Natasha and I were traveling together with her family to visit a safari park. As we passed through Puncak, Natasha’s parents pointed out the signs along the roadway that were advertising the availability of villas and escorts. The ensuing conversation provided more detailed information about the services that were being offered. Collectively we decided that we needed, if at all possible, to provide a supportive documentary for the young women, especially minors, who were being exploited.

What did you enjoy the most about working the film? What did you find more challenging at any stage of the process?

Cheryl and Natasha-  The most meaningful part of working on this documentary, for both of us,  was the opportunity to bring to the screen the story of a girl who was still a minor when she was sold into a Mut’ah marriage.  By sharing her story we have been able to provide an awareness for our diverse audiences of what a Mut’ah marriage represents.

The most challenging part of producing this documentary was to find a girl who was willing to share her story with us. It was especially difficult because of the trauma, fear and personal humiliation that many of the young girls with whom we were able to speak, still suffered.  Understandably many of these young girls were not prepared to share their story. We are very grateful to have been able to  find a girl who had the courage to share her story.  In response to her courage we provided her identity with the maximum protection.

Natasha- There were several abusive scenes that we shot on set as part of the reenactment.  We needed to make sure that the actress who was cast as the victim would feel safe in portraying the girl during these sequences.  We also needed to make certain that the actor portraying the perpetrator would also be able to fulfill his role.  We also needed to go through the scenes slowly, and with a number of repeated takes in order that everyone on set felt comfortable.  It was important to insure that the abusive reenactment scenes were able to capture the emotions that were experienced in order to properly deliver the story to an audience.

If you were to shoot the film again, what would you do differently?

Cheryl and Natasha – There is nothing that we think that we could or would do differently.  We are grateful to each of the individuals who agreed to be interviewed and work with us to tell the story.  We are proud of this collaborative effort and the candor that was shared.

How long did it take from start-to-finish to make “Holy Prostitution”?

Natasha- It took four years for us to produce this documentary, from concept to completion.  After doing the necessary research we began to do some of the filming in 2019.  Then came the pandemic and everything was put on hold.  We needed to wait for the lockdown in Indonesia to be lifted before we were able to continue filming. The post-production editing, in both Indonesia and the United States took approximately two years to complete.  In order to properly address the complex issues presented by the Mut’ah marriage we engaged with several consultants before finalizing the documentary.  We are proud that we were able to complete and present, “Holy Prostitution.”

What is the message that “Holy Prostitution” conveys?

Cheryl and Natasha-“Holy Prostitution” provides a visual introduction to the sexual trafficking of young women, especially minors, that has been and is continuing to be practiced in Puncak, Indonesia today.  All of the participants in the Mut’ah marriages, the parents of minors, the willing women above the age of majority, the imams, the facillitators, and the men contracting for the marriages need to be held accountable,  We hope that through greater public awareness that the practice of Mut’ah marriage will be stopped…at least in Indonesia.

What’s next for you? What are you working on at the moment?

Cheryl- For me it has been a privilege to work together with Natasha, a talented and young filmmaker who shares the same storytelling goals and focus as do I. Regardless of the miles that separate us, we have been able to work together, with the benefit of technology, as though we were in offices next to each other. Natasha and I look forward to producing a sequel to “Menari” a film that celebrates the history of Indonesia’s traditional dances. There is much beauty in the Indonesian culture that we want to share with international audiences.