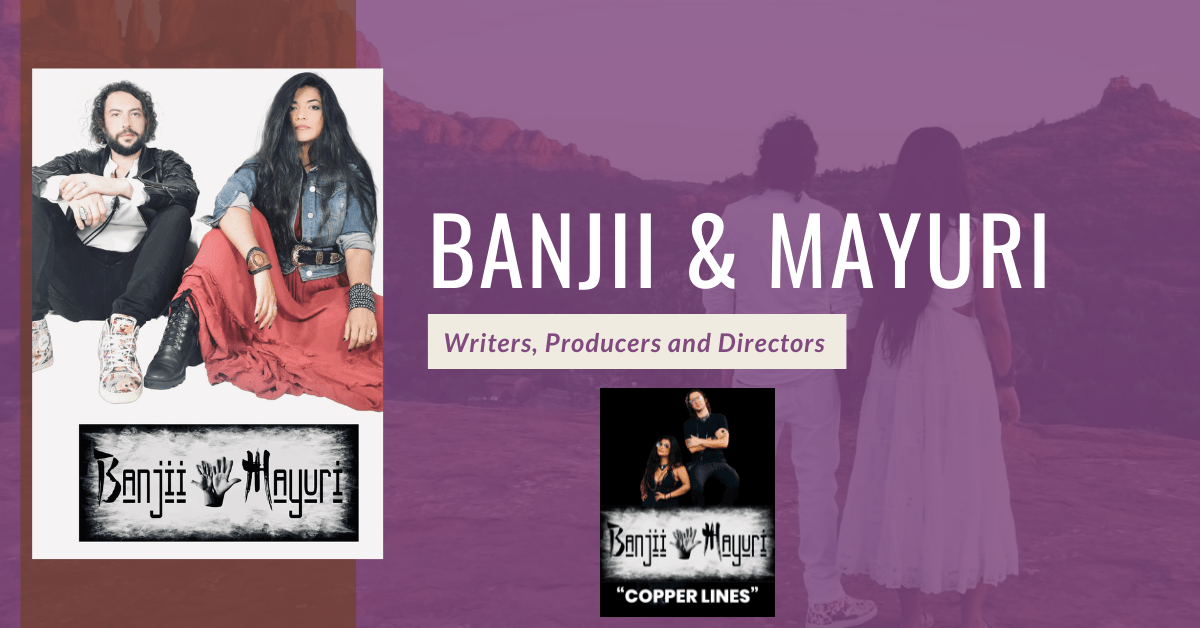 Banjii is a multi-instrumentalist from the mountains of Georgia, USA. Mayuri is an Indian classical dancer and business strategy expert from Pune, India. Their goal as creators is to promote transformation and connection through music and film

Hi, Banjii & Mayuri! Thank you for granting this interview and sincere congratulations on your Outstanding Journey as a Filmmakers and Artists

1. You wrote, produced, directed and played the Official Music Video “Copper Lines”. What should the audience expect to see?

Visually they will see gorgeous landscapes from Arizona, part of our real wedding ceremony in Sedona, and perhaps the palpable connection that we share as a couple and a band. Everything else, the spirituality side of it and such, his left for the audience to interpret, to ‘see’

2. Tell us a bit about your background. When did you decide to become in artists and filmmakers?

Banjii – I grew up in Dahlonega, Ga which is at the foothills of the Appalachian mountains in the USA. It was and mostly still is a very small town, with lots of wide open space and beautiful views. My parents, grandparents, family and friends were super supportive and loving for which I will always be grateful. Growing up in the Appalachian mountains, there was always a rich bluegrass and old-time music scene. Because that was the music that was being made at a high level around me, I decided to play the guitar at age 14. The music community really lifted me up and helped me understand not only the technique of playing music, but the beautiful culture of sharing it with others. I decided at 16 years old that was going to be an artist, full time and for forever. I’ve never looked back. The filmmaking is new and because of Mayuri.

Mayuri –  I grew up in India in a middle class family with my two parents and a younger sister. It was Banjii that brough the music into my life. I met him at his music school/art gallery which was in my neighborhood, during the pandemic. I first bought art and then we started with music lessons. Which turned into writing songs together! When we wrote our first song, Copper Lines, I knew this was it! It took him a bit longer to realize it! On paper, we don’t have much in common but music cut through all the differences and spoke right to our hearts. “It’s not about what I know, but how you made me feel.” That’s a lyric in our song. I realized the power of music that day and knew that I wanted to leverage it as a platform to express myself and be truly heard and seen. More importantly, I wanted to continue using it as a tool to connect with my beloved Banjii. Making films around the music seemed like an extension of the storytelling and brought a new level to the experience we were trying to create for our audience.

3. What are the singers or bands that inspire you the most?

4. What was the hardest artistic choice you made in the making of “Copper Lines”, at any stage in production?

To make it! Mayuri had written the words to the song in Arizona a year ago on the Harvest Moon. I (Banjii) wrote the melody the following week. So we decided to travel there to celebrate the anniversary of the song! On the way there, we decided to film the video with a bigger production and shorter timeline while we were on the flight. I guess it wasn’t that hard, because we made it quick, and two days later we shot the video. Incidentally, we also decided to get married upon landing as a part of the music video!

5. Where did you get the inspiration from for creating your songs? How did you come up with the idea for “Copper Lines”?

Banjii – God, life, our children. Mayuri came up with idea of Copper Lines the previous year when she visited Sedona. When she came back, she had written the words to our very first song.

Mayuri – When I was in Sedona, we did a tour of the energy vortexes and the guide told us all these stories of ancient worlds that existed in these lands… they tried and failed. Legend says a fourth world, our world, will fight an epic battle and this world will make it! The song is a narration of this tour experience that we had, which included walking around a holy circle to release our past trauma, and actual COPPER LINES that we used to find underground sources of water!

6. Were you influenced by something in your past? What made you pursue music & film making?

Banjii – I’m influenced by all the music that I’ve heard and the amazing support from the mentors I’ve had in this community. I believe I just decided pursuing music was as noble as any other thing, and I was already doing it. Life just sort of nudged me into this field.

Mayuri – Yes, I wanted to tell stories for a while, ever since I decided that I wanted to facilitate connection in the world to make it a better place. I already knew the power of telling a true story in creating this authentic connection and empathy. Growing up, I didn’t always feel deeply connected to the world around me… there was something missing.  Storytelling was a tool I was learning to use in the past few years to make sense of all these connections around me. Film and music then became the medium to fulfill this purpose.

7. What is the universal message that “Copper Lines” conveys?

Mayuri – Together we must rise. Together we WILL rise. Copper Lines represents healing and salvation through love and faith. Yes, the world is dark today. But there is still hope. In this song, hope is a spring, unseen on the surface, but existing nonetheless. From underneath the hot desert it provides sustenance to the tree of life.

8. What would be your piece of advice to a new artist? Or a band setting out to make music?

Banjii – Have a message, or some purpose. Sing about your truth. And, use all of the amazing recording and social media tools that make the process much faster. For example, most people have access to GarageBand. Use it, and record it just to listen back. Then do it again and again until you love it, or until it’s time to move on. Either way, I think recording, just the process of doing it, is so informative and it gives you the opportunity to listen back as the critic, without being the one creating it. Never be the critic and the creator at the same time.

And if you’re a new band, perform as much as possible. Do little gigs that pay much or anything, just for the experience. And once you get to a certain level or popularity, charge what you’re worth. Artists need to get paid for what they do and what they bring into the world.

Mayuri – Just two more things to add to everything Banjii said. Not everyone is the “right audience.” Figure out who your target audience is and ignore the ones that will not connect to your message. And BELIEVE! You must believe in you and your art and your team all the way for it to truly manifest into what you want it to be.

9. Do you think the era of online streaming for content has had a positive or negative impact on the music industry?

Banjii- Yes and no. No because artists can’t make money from selling records anymore, which hurts the bands that are using that cd money to pay for bills like gas and lodging. It hasn’t impacted Jay Z, but it has impacted the regional bands.

Yes because now you can get your music in front of the whole world, much easier for almost no expense. That’s been a game changer for many artists. And for us, we are only making content right now, instead of performing live, showing our work through Film Festivals and on the different media platforms like YouTube and Facebook

10. What’s next for you? What are you working on at the moment?

Copper lines is the first of a 7 part music and film series called Uncommon Love Story, and we are about to record and film our 4th in New York City (and perhaps another surprise location!) called “One Way Ticket” which is set to be released in the summer. “Uncommon Love Story” is based on the eastern notion of the seven chakras, which are spiritual power centers in the human body. “Copper Lines,” incidentally, is about the first chakra, the root chakra, which signifies survival and grounding. Every song is complemented by music videos shot in various gorgeous locales across the United States, delving deeper into Banjii and Mayuri’s thoughts, souls, and lifestyles.